To extend the Penguin Brand by translating the iconic Penguin Classic Paperbacks into designs, products and ideas for retail.

The project had a 10 year life with products were designed, prototyped, sourced, manufactured, wholesaled and distributed in UK, Europe, USA, and Australia.

Final phases involved agreements with the US, Canada and Australia divisions of Penguin Group to distribute within territory. Penguin Group brought the project in-house in 2012 as part of pre-prep for its merger with Random House. Tony Davis oversaw transitional arrangements for manufacturing, testing, and branding continuity during this phase.

The artist in me cries out for design - Robert Frost

Design Ideas which stayed as protoypes

If you are truly innovating, you don't have a prototype you can refer to - Jonathan Ive

Be careful - with quotations, you can damn anything. - André Malraux

Press and PR
The response to the designs was phenomenal for a decade. Everyone sold them. We think almost everyone has them.

They have featured in almost every magazine of quality globally. They’ve appeared as props in West End plays. Lifestyle makeovers. Documentaries about design of the Deckchair. Incidental elements in Films (Simon Peg in How to lose Friends and Alienate People adaption of Toby Young’s b ook, which has Actor Bill Paterson Simon’s Dad in the film washing the mugs in New York) and TV. Elbow created a pastiche for their Seldom Seen Kid Album. Grayson Perry has parodied them (woven Penguin Mugs as in his Vanity of the Small Differences Tapestries at Victoria Miro.

Lily Allen has even been chased down the street by the paparazzi carrying her Penguin Mug. When the BBC did a feature on Penguin Books at 75 seven images summarised the company Pearson’s Marjorie Scardino was shown with one of our Deckchairs (also used for the Financial Times annual report). Below is just a very small selection of the press garnered by the project.

Anthony Gormley’s Trafalgar Square Plinth One and Other project saw William from Melrose installed just after midnight with his Big Sleep deckchair and a Penguin Mug.

There was even polemic about books being turned into commodities in The Guardian which Tony Davis replied to in article form.

…in British acting circles, these probably now have the cachet of an Oscar! (commenting in The Times on receiving an Agatha Christie Body in the Library Penguin Mug) 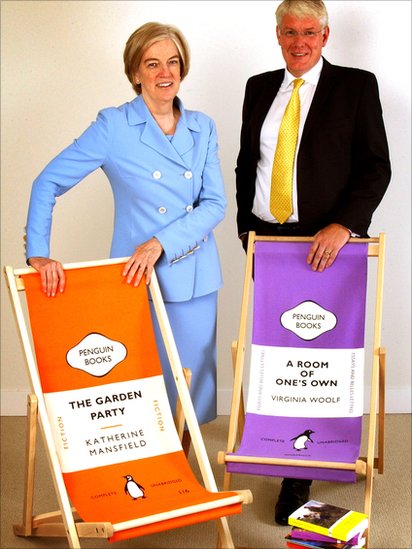 Display your intellectual credentials with a classy mug

The Scotsman Design for Life Penguin mugs – the freshest look for your table

it can be confidently asserted that the presents which gave me the most pleasure were the cheapest: mugs imprinted with the jacket images of two of my favourite books

Feelgood, zingy orange mugs – you know you want it

Tony Davis was inspired by the original classic banded Paperbacks (designed by Edward Young in 1935) from Penguin. He grew up seeing them everywhere and then they disappeared except to collectors. The Penguin Brand and familiar (if subtly altered logo) was still very much evident but book design had moved towards photography and illustration in the 50s and 60s. The original cream and orange banded paperbacks could only now be found in secondhand bookshops. The orange still remained a key part of the Penguin logo.

So how to translate a design (from the 1930s onwards) which still had a cognoscenti following amongst typographers and designers but had largely disappeared from public consciousness? The original typography was created by Jan Tschichold.

Tony Davis’s exciting vision was that the originals (in all their variety) could be ‘translated’ into lifestyle objects which were utilitarian and mass-market, affordable yet without sacrificing quality (like Allen Lane’s original intention for the Paperbacks). In addition, there was the potential to play with language and the relationships of Author and Title with an object. Suggestions anyone for Raymond Chandler’s The Big Sleep…?

All life is an experiment. The more experiments you make the better - Ralph Waldo Emerson